As I've said in the past, what I need to do as a writer to further establish myself is to get more work published and available to the readers. I thought I was going to do that be rewriting "The King's Shoemaker". In retrospect, I'm finding it wasn't a simple rewrite. I've bogged down at 70k words and finding it boring. If it bores me, I'm sure you'll stop reading/listening, so when I get back to it, and finish it, there will be at least one big edit before recording.

While that was going on I switched back to finishing "Summer Surprise" and getting it recorded. The story is done and I really want to get it posted. But by the time the kids are in bed and it's quite enough to record, I'm pooped.

I wrote a story for the Masters of Macabre contest at www.HorrorAddicts.net and won that competition. Yup. I'm the master.

I wrote a Thanksgiving murder mystery for a competition which was rejected within a day of submission. I've been debating submitting that to other magazines or putting it up at Smashwords.

When I last ground to a halt on "Shoemaker" I started another Galactic Battle Base story, that I really love. I'm within 5K words of finishing that one (at about 28K words) but had to start a story for the Editor's Issue of Flagship Magazine at www.FlyingIslandPress.com. It's coming along ok, but I really have to think about it because it's in a shared universe with the other editors.

On top of that, Nanowrimo is coming up. I'm outlining heavily for that. My story will be about the parents of the boy in my GBB novella. They go out on a top secret mission to an uncharted star system and don't know if there son will suffer another seizure, which will have the potential to kill him.

So, in the next twenty days I need to 1) Finish recording and editing "Summer Surprise", 2) Finish "Human Magnetism" - the Battle Base Novella, 3) Finish my Flagship short story, and 4) Finalize my outline for Nanowrimo.

Wish me luck. If you do Nano and I'm not already on your buddy list, and you on mine, buddy me and I'll buddy you back.
Posted by Norvaljoe at 4:12 PM 1 comment: 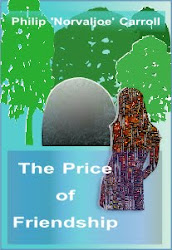